A walk through the heart of Geneva

A walk through the heart of Geneva

Go for a lovely walk through the heart of the city and explore Geneva’s fascinating history. Discover the must-see monuments. 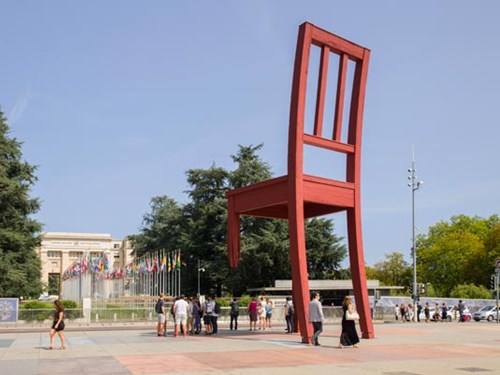 The Broken Chair, an impressive sculpture, is an emblematic symbol of peace. Broken Chair is the work of famous artist Daniel Berset for the NGO Handicap International. Made out of 5.5 tonnes of wood and standing at a height of 12 metres, the chair stands on only three legs and has been dominating the Place des Nations since 1997. This giant work of art delivers a simple message: remember the victims of landmines, and urge your government to promote a ban on landmines.
Learn more 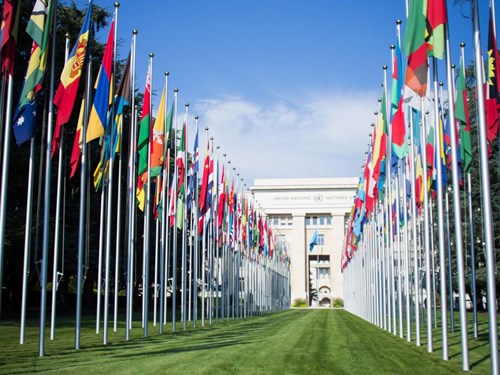 Built between 1929 and 1936 and located in the Parc de l’Ariana, the Palais des Nations houses the European headquarters of the United Nations, and is the second-largest UN centre after New York. More than 25,000 delegates pass through the centre each year, and many works of art are on display there. The Palais opens its doors daily and provides fascinating guided tours.

> Go back into the bus 5, 8 or F to Geneva Cornavin Railway Station. 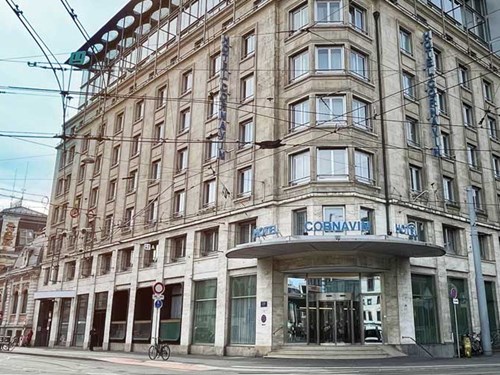 Built in 1931-1932, the Hôtel Cornavin is the work of architect Jean Camoletti (1891-1972). The Hôtel houses the world’s largest clock standing at a height of 30 metres. In 1956, Hergé, who created Tintin, writes « The Calculus Affair » taking place by the Lake of Geneva. Professor Cuthbert Calculus stays at Hôtel Cornavin in Room 122. Yet Room 122 never existed! During its complete renovation in 2000, the Hôtel finally opens the Room to meet persistent requests and pay tribute to Belgian author Hergé. Tintin readers come from around the world to visit the Hôtel Cornavin, also known as the « Hôtel de Tintin ».
Learn more

Built between 1852 and 1857, the Basilica of Notre-Dame is the main place of worship for Geneva’s Catholic community. Pilgrims stop there on their way to Santiago de Compostela. In 1875, the Basilica was occupied then closed, after the anticlerical government came to power. The Catholic Church was able to buy it back in 1911. Its architecture was inspired by the 13th century Gothic style.

> Walk down the Rue des Alpes or the Rue Chantepoulet.

With its neo-gothic style, the Brunswick Monument is a surprising architectural work. Charles d’Este Guelph, Duke of Brunswick, made a fortune in Paris before moving to Geneva, where he died in 1873. He leaved his estate to the city with the provision that it would stage a grand funeral and build a monument in his name. Never before had a mausoleum been built in Geneva. No wonder the project gave rise to heated debates! It was finally built in the Jardin des Alpes, the former port of the Pâquis district.

> Cross the Pont du Mont-Blanc and walk along the lake to the Jet d’Eau.
Learn more 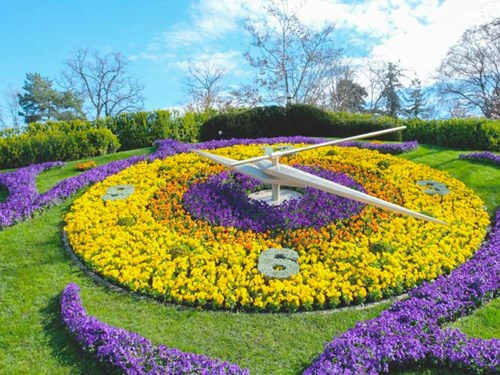 The Flower Clock contains about 12,000 flowers and has been dominating the English Garden since 1955. The floral arrangements change every season. The Flower Clock is not only pretty, it also tells the time with Swiss precision - the time you see is transmitted by satellite. The seconds-hand is 2.5 metres long, the world’s longest!
Learn more 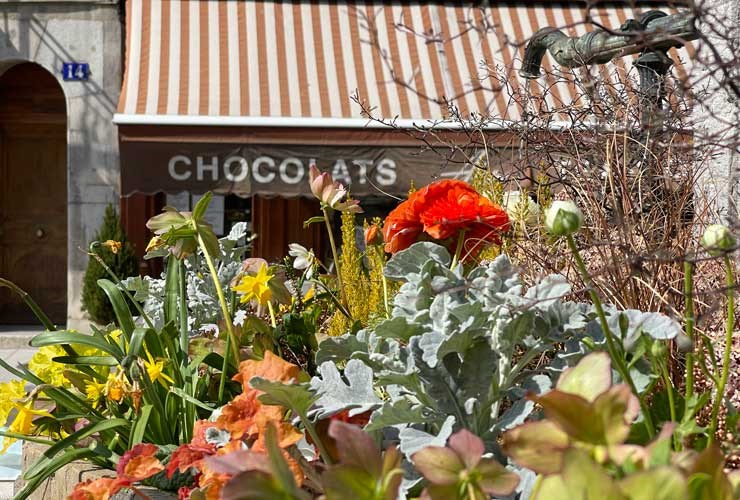 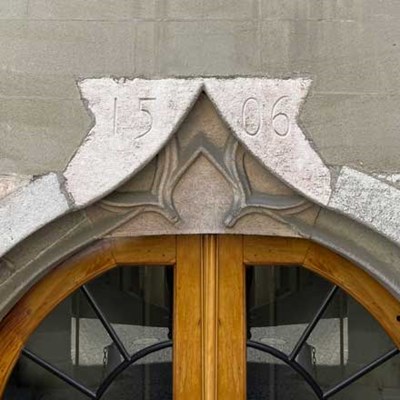 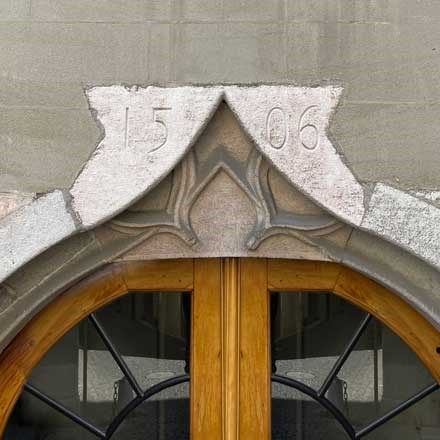 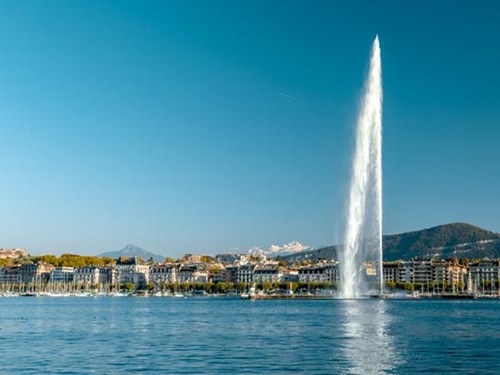 Since 1891, the Jet d’Eau has been one of the best-known symbols of Geneva. It represents the international reputation, dynamism and ambition of a forward-looking city that protects its environment. The Jet d’Eau is 140 metres high and shoots out water at a speed of 200 km/h.

> Retrace your steps to the gateway to the Old Town.
Learn more

For many centuries, Place Molard was a port open to the lake. Originally, the Molard Tower was part of the enclosure which surrounded the city and protected the port. During its reconstruction in 1591, the tower was decorated with friezes and coats of arms of major personalities from the Reformation. A plaque honouring ‘Geneva, city of refuge’ is also engraved on the Molard Tower.
Learn more

The Temple de la Madeleine played a major role during the Reformation and calls to mind such names as Jean Calvin, Guillaume Farel and Michel Servet. The building dates back to the 15th century, but had to be restored after it caught fire in the 17th century. Since the 1960s, the church has been the place of worship for Geneva’s Swiss-German speaking community, and boasts beautiful stained-glass windows. The Temple de la Madeleine has been dominating a shopping, historic, colourful square.

> Take the Rue du Marché and walk along the Rue de la Corraterie.

Jean Calvin, Guillaume Farel, Théodore de Bèze and John Knox, the main protagonists of the Reformation, watch over the Parc des Bastions. They are depicted in monumental statues and bas-reliefs. Geneva’s ‘Post Tenebras Lux’ motto is engraved in the wall.

> Walk up to the Old Town.
Learn more 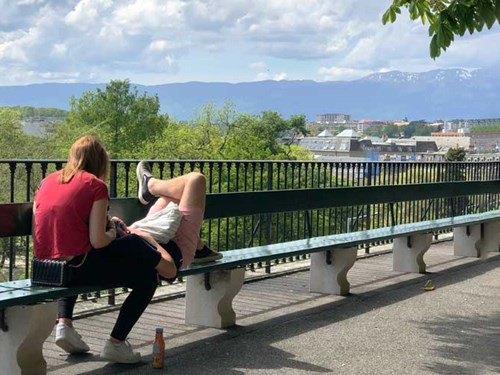 With 120 metres long, the Banc de la Treille is the world’s longest wooden bench. Just below the Town Hall, the bench runs the length of the Promenade de la Treille and offers a panoramic view down to the Parc des Bastions. This is where the official chestnut tree of la Treille stands. Ever since 1818, a city official has had the task of recording the first bud to appear on this tree, because it marks the arrival of spring.
Learn more 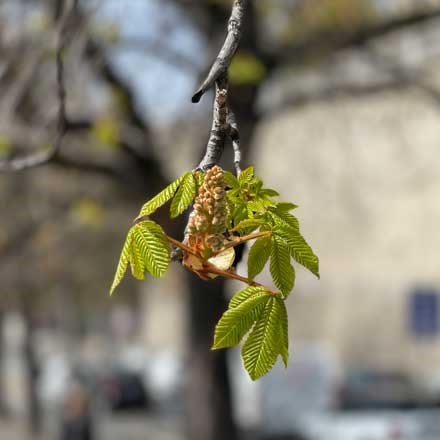 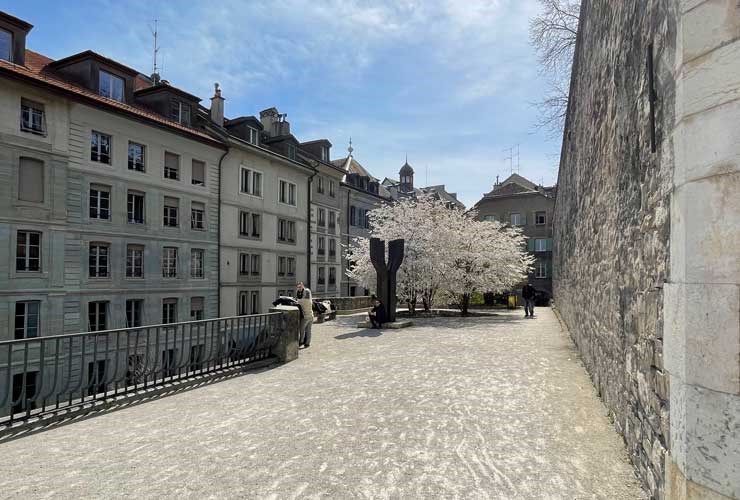 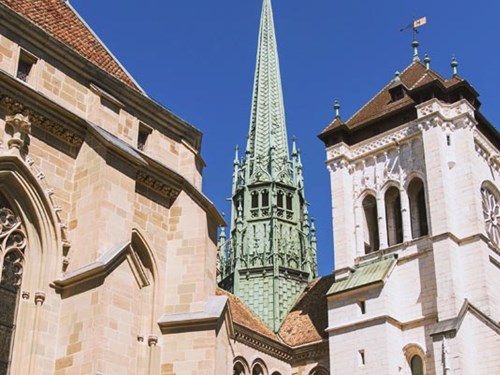 Built in the 12th century, St Peter’s Cathedral underwent important transformations. Since 1535, during the time of the Reformation, the Cathedral became a place of Protestant worship. With its neo-gothic style, the Chapelle des Macchabées is a must-see place. By climbing the 157 steps of the north tower, you are rewarded with a breath-taking panorama of the city and the lake. Finally, don’t forget to visit the archaeological site below the Cathedral and admire its treasures dating back to Antiquity.
Learn more 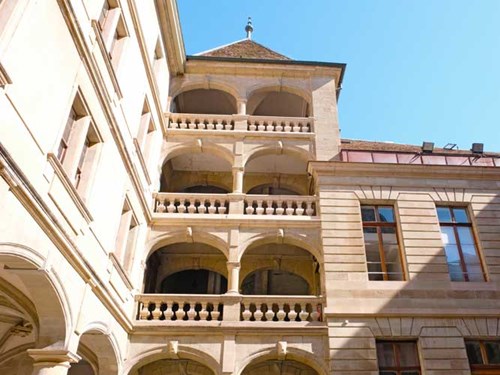 In the heart of the Old Town, the Town Hall is the seat of Government of the Canton and Republic of Geneva. In 1864, the first Geneva Convention - the founding act of the International Red Cross - was signed in the building’s Alabama Room. In 1872, the « Alabama » tribunal also ended the conflict between the United States of America and Great Britain. Today, you can walk up the cobbled spiral staircase to the upper floors.

> Walk past St Antoine’s prison and the Museum of Art and History.
Learn more 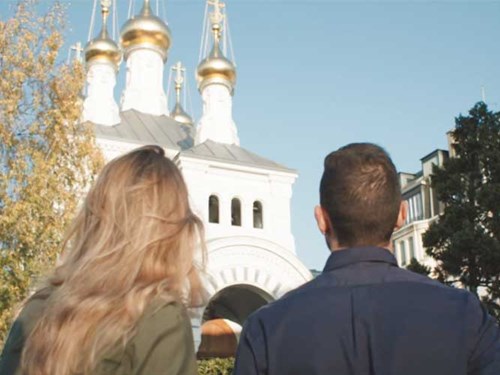 In 1859, the Russian Orthodox community of Geneva was given a permit to build this church after Anna Feodorovna Constancia, Tsar Alexandre the First’s sister-in-law, promised financial support. Situated in the upper part of the Eaux-Vives district, the Russian Church is built on the ancient site of a Benedictine priory. With its extraordinary golden onion domes, the church is one of the most beautiful buildings in Geneva.
Learn more