Why your film should be shot in Geneva

With its prime location on the banks of Lake Geneva, the city provides breathtaking views and serves as the ideal starting point to the Alps. Geneva is renowned as the cradle of luxury watchmaking and the place with the most exclusive boutiques. Playing an important humanitarian role, the “Peace Capital” is also the meeting place of the world's business leaders. Geneva is more than you can imagine! The vibrant cultural life and world-class events of this cosmopolitan boutique town offer experiences to cherish forever. The sheer diversity, the power of water in the city and the peaceful atmosphere in Geneva will truly make your production stand out.

The city is a one big open-air studio

Renowned for its lakeshore scenery, Geneva also offers an immense diversity of other settings, from beautiful vineyards to the cobbled streets of the Old Town. Furthermore, thanks to its temperate continental climate, the city provides a wide range of possible weather types.

Filming permissions are easy to obtain in Switzerland as well as in Geneva. Unlike many other European countries, Switzerland has a very open approach to filming in public areas, on streets or on highways. Distances between shooting spots are also very short and you can easily go from one place to another without spending too much time in cars.

A living record of European history

Examples of the passing centuries are to be found in Geneva’s neighbourhood, from its medieval fortresses to the urban architecture of the technological age. As the world’s third largest financial center, Switzerland is also famous for its banks, its luxurious hotels and for the many international institutions to which it plays host.

They are so many ways to look at Geneva through the eye of a camera. Below you can see a selection of locations available for audiovisual productions as well as the productions that have already been shot in these places. For more information on the locations, or if you can’t find what you are looking for, do not hesitate to contact us! 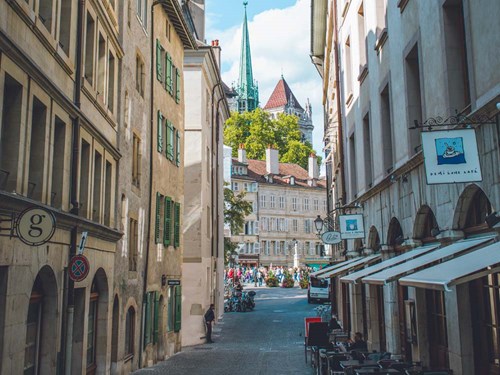 Switzerland's largest historical city, the Old Town in Geneva is dominated by St. Peter's Cathedral, the centre of the Reformation. The small cobblestone streets tell its story through small squares, historic buildings, mysterious museums and famous secret passages. Geneva is the historic birthplace of Henry Dunant, founder of the Red Cross, and the writer Isabelle Eberhardt. It is therefore only natural that films about the achievements of these two personalities should use the city as a setting. Dominique Othenin-Girard's version of Henry Dunant's life, HENRY DUNANT: DU SANG SUR LA CROIX (2006), uses the space by filming a good portion of the Old Town. An Old Town that also serves as a setting for ISABELLE EBERHARDT (1991).
But Geneva is also the setting for literary classics. By adapting them on the big screen, the filmmakers have respected the visual appeal of the city. It is Geneva is where people come to find a breath of freedom, as the author Milan Kundera. 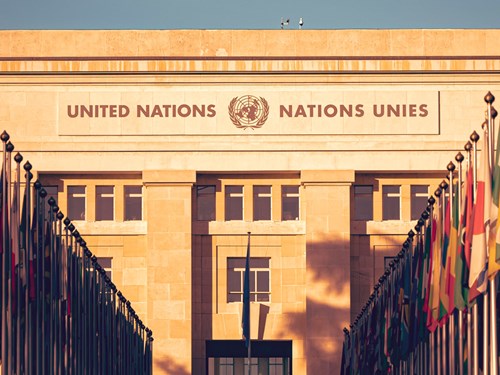 It is true that there are more Geneva banks in the history of cinema than in reality, but the city is also the European capital of international institutions. A good reason to go there. The WHO is the setting for the work invented by the chilling hero (Daniel Auteuil) of THE ADVERSARY (2002). There is, however, no fictional job for the scientist character played by Marion Cotillard in CONTAGION (2011). The sight of the WHO building is enough to make this now visionary story of a deadly virus serious.
In the future depicted in ROLLERBALL (1975), director Norman Jewison places all the memory of human knowledge in the Palais des Nations.
In a modern-day UN, the organisation's investigator, played by Sharon Stone, goes to confront billionaire vigilante Largo Winch in LARGO WINCH II (2011). CERN is also a star when it comes to confronting science religion or fantastic phenomena. ANGELS & DEMONS (2009) begins with a flight of antimatter in the laboratory for nuclear research laboratory. 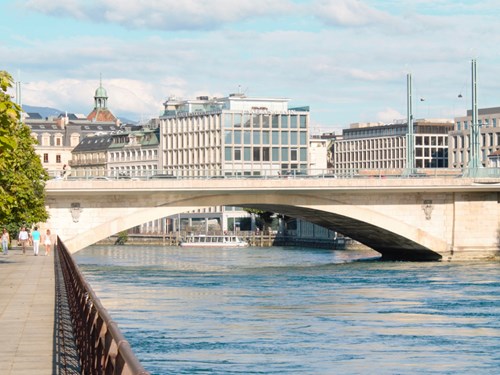 There is no better place than the public spaces of a city to think about society. Geneva, which also benefits from an important and sometimes overwhelming intellectual baggage (Calvin, Rousseau...), is no exception to the rule. In NOUVELLE VAGUE (1990), Alain Delon walks through a factory in Les Charmilles. As mysterious as the film itself, he embodies a meditation on both the cinema and the world, a theme that Jean-Luc Godard is very fond of.
It seems to go without saying that a personnel manager (Pascal Berney) and an unemployed man (Frédéric Polier) discuss the absurdity of life on a deserted Plainpalais plain in ÇA S'EN VA ET ÇA REVIENT (2005). The terrain is conducive to the exchange of points of view, as symbolised by the camera, which is itself taken to task. Laurent Nègre enjoyed filming the Geneva nightlife in Plainpalais in OPERATION CASABLANCA (2011), a comedy about terrorism. 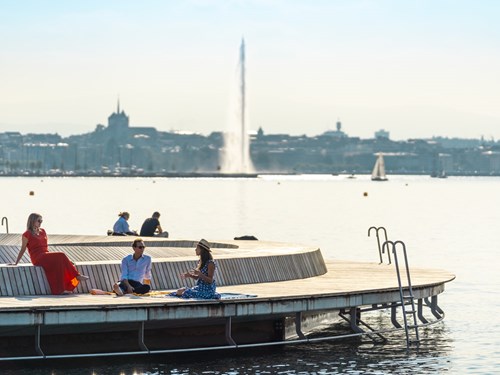 Water ist the element that makes the atmosphere of Geneva, with the lake giving way to the Rhône, into which the Arve flows to blend its colours. Incredible settings are available for filming powerful scenes. For example, for most Swiss filmmakers filming in Geneva, the Bains des Pâquis are one of the most popular locations. It's true that the place is cinematic and brings together the lake, a particular architecture and a meeting place. L'INCONNU DE SHANDIGOR (1967) masterfully uses the most surprising angles to angles to make the space as bizarre as possible. Luc Godard uses the set in a way that is both naturalistic, a legacy of the New Wave, but also heavy with hidden meaning.
Also, in Elena Hazanov's LA TRADUCTRICE (2005), it is the place chosen to evoke sensitive issues where family, justice and world affairs mix. 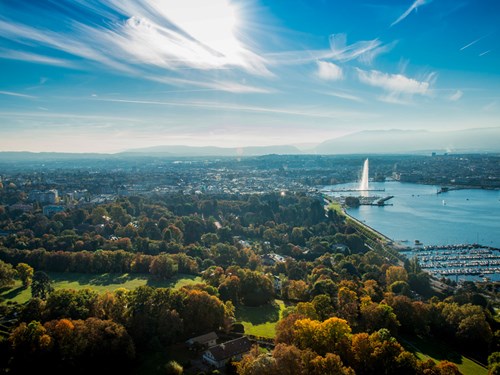 Nature in the city

Geneva is a urban gem thanks to the blue and green nature flourishing inside the city itself. The parks along the lake, facing the montains, surrounded by the old Cathedral Saint-Pierre and highlighted by the Jet d’Eau, are a beautiful scenery for people to live in and for strong characters and movie heroes to be filmed.
The director of SYRIANA (2005), Stephen Gaghan, knows how to of Geneva (the water fountain, the parks, fountains) to make an idyllic setting that contradicts the torments of the torments of the couple played by Matt Damon and Amanda Peet who are struggling with the imbroglios of the oil world.

One of the best city for filmmaking 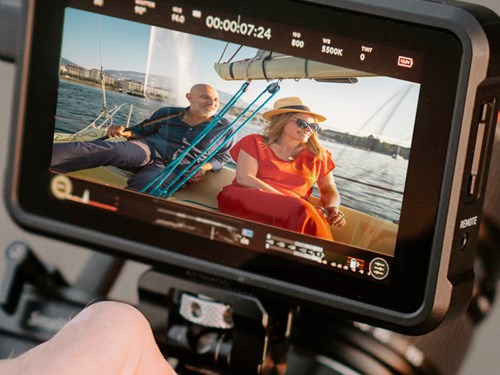 Here you can find contacts of production companies and location manager throughout the region ready to assist you in the realization of your projects.
More info 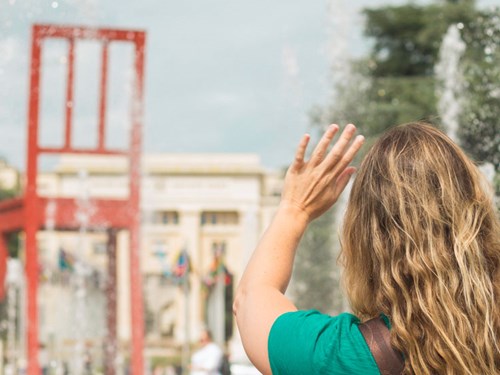 The Old Town and its treasures, Geneva’s watchmaking history, the highlights of the Reformation: our guides will lead you through the streets and reveal their most evocative details.
All guided tours

Geneva, the perfect city for your production